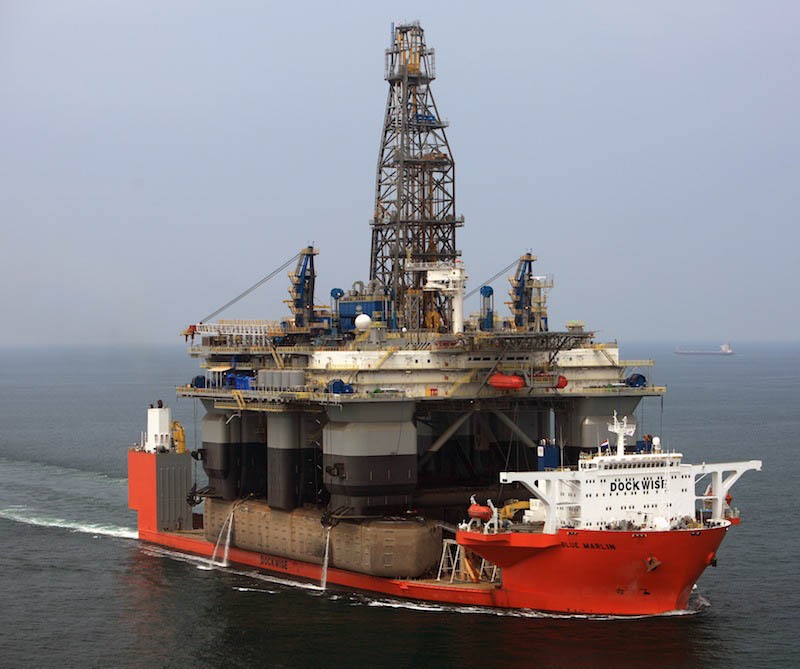 The Blue Marlin breaks record moving the BP rig and continues to break it’s own records. There’s now a new ship for decommissioning oil rigs that is hailed as the largest ship in the world, The Pieter Schelte, which is part robot.

Short of moving mountains, there´s hardly anything the Blue Marlin can´t do.

Equipped with a 17,160 HP engine and a lifting capacity of over 76,000 metric tons, the the world´s largest semi-submersible ship has transported some of the most massive structures known to man. For instance, the 738-feet long vessel was the U.S. Navy´s obvious choice when they needed a way to deliver the destroyer USS Cole back to the United States after the warship was severely damaged by an Al-Qaeda suicide bomber attack in Yemen. And a year later, the carrier pulled off its most impressive feat by hauling the 60,000-ton Thunder Horse PQD (AKA the world´s largest semi-submersible oil rig) nearly 16,000 miles from a dock in South Korea to Corpus Christi, Texas.

But even such notable accomplishments may soon be dwarfed when the Vanguard, a new addition to dockwise´s transport fleet, arrives later this year. While the heavy lift vessel boasts an unheard of loading capacity of 117,000 metric tons, it´ll also sport an innovative bowless design that will allow the ship to support wider, longer and overall larger structures.

The Vangaurd is the industry´s solution for a world in which oil rigs are not only rapidly increasing in size, but are also being moved into deeper and remote waters. “We investigated whether our ships were able to transport such cargoes. Our conclusion was that they had insufficient capacity and inadequate deck-area. The bow and the accommodations are usually in the way, explained project engineer Michel Seij. “The bowless design of the Dockwise Vanguard is the logical consequence of this.”

Also, “the design allows for large amounts of water to flow along the entire deck of the vessel without there being any chance of water entering the confines of the Dockwise Vanguard,” he added.

From an engineering perspective, this meant the crew’s accommodation would have to be built on the extreme starboard side of the vessel together with the lifeboats structure. The $240 million Vanguard will be 275 meters long and 70 meters wide with the ability to support cargo that stretches as much as 170 meters beyond those dimensions.The ship is being built at a Yard in Korea and is expected to enter service by the end of the year.