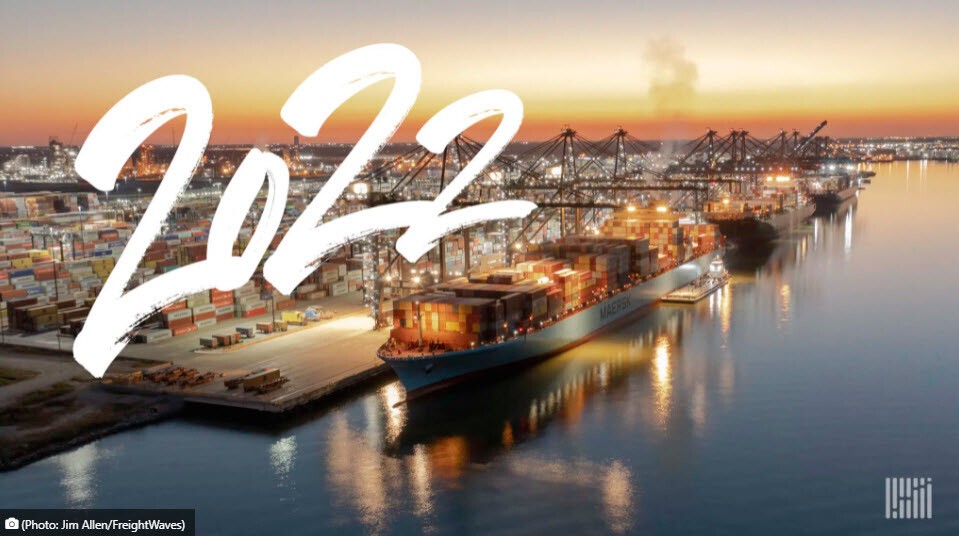 Never has container shipping begun a year on such a high.

The Shanghai Containerized Freight Index hit a new record in the last week of December, up 76% year on year and topping 5,000 points for the first time. There were 101 container ships waiting for berths in Los Angeles/Long Beach on Sunday, very close to the peak. Trans-Pacific spot rates quoted for this month are higher than in December, which were higher than in November.

The overwhelming consensus is this year will remain extremely strong for ocean carriers and extremely expensive for cargo shippers. But there are at least six big “known unknowns”:

The bullish view on rates is that volumes will continue to be very high this month, prior to the Lunar New Year holiday. Volumes will pick up once again after China resumes work, with U.S. importers seeking to restock depleted inventories during the spring, after which the 2022 peak season will keep rates elevated into Q4 2022.

According to Judah Levine, head of research at Freightos, “There is no strong expectation of significant improvements [for cargo shippers] until underlying demand wanes. That doesn’t look like it will be happening anytime soon.”

At the very far end of the bullishness spectrum is the Deutsche Bank team led by U.K.-based analyst Andy Chu. The team’s 2022 estimates of earnings before interest, taxes, depreciation and amortization for Maersk and Hapag-Lloyd are more than twice the consensus average. According to Chu, 2021 was the best year for container shipping on record “but we think that 2022 will be materially better.”

The bearish view is that freight rates have been propped up by U.S. stimulus — which is now over. Consumer demand will fall, inventories will not be restocked to the extent predicted, and port congestion will clear.

Jason Miller, associate professor of supply chain management at Michigan State University’s Eli Broad College of Business, pointed out that retail sales were “abnormally strong” in 2021. He expects “we still start to see a strong regression towards the long-term trend line [for retail sales] in 2022 with no additional stimulus, student loan deferrals ending … and the likely shift of COVID-19 to an endemic disease.”

Retail inventory-to-sales ratios are historically low, but Miller noted that this ratio was declining pre-COVID and inventories are now far above their historical trend line. Given the uncertain nature of COVID-era demand, he questioned how much retailers would add to inventories this year. “To the extent the answer is ‘we will wait and see,’ this calls into question arguments that retail inventory restocking will be a major source of freight in 2022.”

Ben Nolan, shipping analyst at Stifel, outlined a particularly bearish scenario in which global spot rates fall from $9,300 per FEU (as measured by the Drewry World Container Index) at the end of 2021 all the way to $2,000 per FEU by the end of this year.

Nolan said this scenario is “much more likely in 2023,” but nonetheless possible this year. “We estimate that much of the extreme tightness on container shipping rates can be attributed to supply chain inefficiencies as true underlying demand was just 3% greater than incremental supply,” he said.

“As is the nature with traffic jams, when the accident is removed, normal velocity patterns materialize relatively quickly. It does not currently look like that accident is likely to be moved soon, but when it finally does, we do not expect ‘this time to be different.’”

The “this time it’s different” view is that ocean carriers will counterbalance headwinds — a drop in demand and/or capacity unlocked by clearing congestion — by “blanking” (canceling) sailings to artificially bring capacity in line with demand to prop up rates, a strategy carriers successfully employed at the beginning of the pandemic.

Daniel Richards, associate director at Maritime Strategies International (MSI), wrote in an annual outlook published by TradeWinds: “If, ultimately, markets do not fall meaningfully once it becomes implausible to blame congestion and Covid-19 … we will readily attribute greater weight to a changed industry structure, as likely will regulators [but] … it is still too soon to tell if the industry is permanently transformed.”

COVID — As this year began, essential services in places like New York City — as well as air service nationwide — were being curtailed by a large number of workers out sick or testing positive, as the omicron variant rapidly spread.

If the same pattern emerges for longshoremen and other workers essential to supply chains, congestion could worsen.

Meanwhile, China continues to pursue a “zero-COVID” policy in which large population centers are locked down for a small number of cases. The city of Xi’an, with a population of 13 million, has been in a strict lockdown since Dec. 22 due to cases of the delta variant. Delta cases have also just been reported in the city of Ningbo, the site of a major port. Yet another outbreak is affecting Yangtze River pilot operations.

If the much more transmissible omicron variant takes hold in China and the country sticks to its zero-COVID policy, it would lead to widespread factory closures, as seen after the initial Wuhan outbreak, and port closures, as seen in Yantian and Ningbo last year.

Port labor contract — The International Longshore and Warehouse Union contract with West Coast terminals expires on July 1. The previous round of negotiations, in 2014-15, did not go smoothly. Disruptions to terminal operations led to backlogs in Q1 2015 similar to levels in the early part of this year.

Taiwan — The other big wild card for container shipping, given America’s exceptionally high dependence on Chinese exports, is the geopolitical tensions over Taiwan. On Thursday, Wang Ming, China’s foreign minister, warned that America’s encouragement of “Taiwan’s independence forces … not only puts Taiwan into an extremely dangerous situation but also exposes the United States to an unbearable price.”

According to Nolan of Stifel, “I hate to even open the door to this Pandora’s box, but clearly the Chinese have coveted the island of Taiwan for years and tension has been rising. Any overt military action on the part of the Chinese would be very bad for all things shipping, as it would likely lead to sanctions and a reduction of the flow of goods. We certainly hope things do not escalate in the Formosa Strait, but it would not be a complete black swan event at this point.”

Texas Global Services comments: We are expecting to see bigger and greener megaships. Recession, we don’t think so. Slow down to be expected but demand is just so high and getting higher. We will see. Would love to hear from other industry personnel.